Some Notes from a Picture Book Illustrator in Africa

As I sit here in my studio looking out over the Atlantic Ocean at the Southern tip of Africa I wonder what about me and my world might interest readers of OUAT, most of whom virtually live on another planet to myself. I am exhausted but I am feeling good. Art materials are strewn all around me, little scraps of paper with color tests on them and all the other paraphernalia that make up my life as an illustrator. This morning I couriered off 56 color illustrations and my mind is still full of images and thoughts of this incredible continent which is my home. The book I finished illustrating this morning is a 112-page book on African Folktales. AFRICAN folktales...

Although I am an eleventh generation South African, the book was not easy. It took a vast amount of research. For instance, the facial features and skin color of the people of each country from which a story came, the combination of traditional jewelry with modern western clothing, regional peculiarities, every detail had to be just right for a book like this one. A book deserving of the kids of Africa. We have so much work to do here. When I lived in the USA it was so easy to talk about concepts like stimulate, entertain, educate... That was a different planet.

I love picture books. And I love books that kids love, particularly the little ones. I remember when I was about four years old my mother gave me a book called Ferdinand the Bull. Half a century later I realize what a profound impact that little book had on me – in my young mind it triggered a fascination with the interaction between words and pictures. I remember pouring over that book and loving lines like “His mother saw that he was not lonely, and because she was an understand­ing mother; even though she was a cow, she let him just sit there and be happy.” I remember some pictures showed far away scenes with big empty white areas on the rest of the page and other pictures showed close-up figures completely filling the page. I wanted to draw pictures like that. Later, when it became clear that my dyslexia made words harder than pictures, I started focusing more and more on expressing myself though drawing, even as a child. And it all started with a little bull who loved smelling the flowers. Years later I learnt that Ferdinand the Bull (1937), was one of the earliest anti-war picture books ever published, if not the very first.

I grew up in the privileged, sheltered world of white kids in apartheid South Africa. It was only when I went to university and met my future husband who had just spent a year as a conscript in the military (he was 18), that we started learning about the real horrors of the Africa we lived in. It was the sixties and of course we were also flower children, but we did not protest against some war in Southeast Asia, we protested against an unbelievably scary thing in our own land, a thing called apartheid... The sixties became the seventies and my head was buzzing with thoughts anti war, anti apartheid, anti sexism… I was a painter and sculptor and I tried to express my feelings though my work.

In 1977 our daughter was born and in 1980 our son. They brought my focus back to children’s literature. I started illustrating and then writing picture books. Soon I was collecting and studying literally thousands of picture books. I became fascinated with what a powerful genre it was. I studied how young minds developed and how high quality picture books were much more than entertainment. How a single picture book can help shape a child’s mind, even contribute to that child becoming a compassionate, caring adult. And I dreamed of creating that one really beautiful picture book.

But the reality is that to be a children’s writer/illustrator in Africa you can never forget how desperate the needs of Africa’s children are. So I had to modify my dream. I now dreamed of creating picture books that might help our kids break out of their vicious cycle of poor education and poverty, give them self-esteem and stimulate their creativity and initiative. I really wanted to create books like Ferdinand for them.

My early books, like A Monster in the Garden (1987), had very subtle anti-racism messages imbedded in the illustrations, and some local university lecturers use them as examples of early South African anti-racism picture books.

Although these books were bought by libraries, I realized that most of our children seldom even saw a book before they got to school. So I became involved in projects work-shopping books specifically for children in underprivileged areas. These books were good (our Little Library collection got the 1996 IBBY Asahi Award) but in the end there was not enough money to reach as many children as we hoped.

Then came a lucky break. I was commissioned to make educational posters to be distributed to preschools in rural farming areas. Most of these schools had no classrooms. Lessons were given under shady thorn trees. I thought the posters might be handy, but I sold the project manager another idea. I knew most of these kids had hardly ever seen a picture book and certainly none of them owned one. So I wrote and illustrated twenty-one stories and laid each out on the two sides of an A3 page, so that the kid could fold it, staple it, cut off the top and end up with her very own eight-page picture book to keep, color and read aloud to grandma back home. The local doctor or police chief was persuaded to make available their photo­copier to Xerox a free copy for each kid in the class. These twenty-one titles became the first picture books owned by thousands of youngsters in our land.

But that tale does not end there. Later I was commissioned to develop these stories into a reading series. I worked for five years writing and illustrating the Bright Books series for the first three school years. It was approved by the Educational Board and became prescribed reading in many schools.

It is such a privilege to make books for the children of this land. Every day has a new challenge. We have eleven official languages in South Africa. One of my books has been translated into ten. I want to see it in the eleventh language too!

But my dream is still to create that one truly beautiful picture book. The book that will make a little boy under a shady thorn tree somewhere on the African veld, or a little girl next to a glimmering swimming pool in Beverley Hills look at the pictures and whisper softly, “wow!” 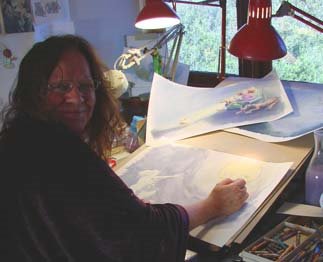 Articles by Marjorie
Contact details go to www.grafikon.co.za/gallery/
Writer and illustrator of Children's books. Marjorie was born and grew up on a farm near Cape Town in South Africa. From an early age she loved drawing animals and people. After school she studied fine art at university where she met her husband. They honeymooned and camped around Europe for a year and then, back in Cape Town had their first child. Reading picture books to her daughter awakened Marjorie's interest and for the last 25 years she has been writing and illustrating for kids. Her picture books, as writer and/or illustrator, have been published in the USA, England, Germany, Greece and many African countries, in English, Afrikaans, French, German, Greek and about twenty African Languages. The original artwork for a number of her books has been shown at various international exhibitions in Europe and elsewhere. Her greatest joy is in writing and illustrating a picture book that is good enough to be kept under the child's pillow at night, but her greatest contribution to date has probably been the 16-title reading series she designed, created and published for the millions of historically disadvantaged beginner readers in South Africa.